Health of the Fishery

According to the Summary of Tuna Stock Status and National Implications for the Federated States of Micronesia published by SPC in December 2017, the most recent assessments indicate that overfishing is not occurring on albacore, bigeye, skipjack and yellowfin tuna, and these stocks are not in an overfished state (Figure 1). 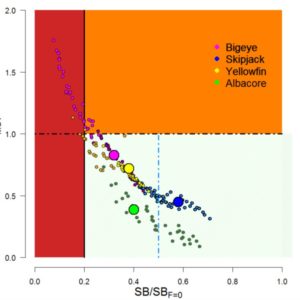 Figure 1: Majuro plot comparing the stock status of the key target tuna species caught in thump Convention Area (WCPFC-CA). Where current fishing mortality rate exceeds the fishing mortality rate at MSY (F/FMSY > 1) then overfishing is occurring. Where the current spawning biomass is less than 0.2 of spawning biomass without fishing, then the stock is overfished (SB/SBF=0 <0.2). The small points are the estimated terminal stock status from the grid of model runs and the large points are the median values from the grid. The blue dashed line indicates the WCPFC interim target reference point for skipjack tuna.

However, catch of each of these species has increased significantly over the past 2 to 3 decades, with corresponding reductions in stock biomass relative to the biomass that would be in the water if no fishing was occurring.  Specific details regarding catch and stock status of each species in the Western Central Pacific Fisheries Commission (WCPFC) Convention Area and the FSM EEZ are presented in Table 2.

Table 2: Key fishery statistics averaged from 2011 to 2016 for each of the four main target tunas.

From the 2016 Annual Report to the Commission – Part 1:  Information on Fisheries, Research and Statistics, the 2016 provisional annual catch and effort estimates for the national purse seine and logline fleet based on provisional data from log sheets totaled 75,444 metric tonnes (mt) of target tuna. The purse seine fleet log sheets estimated catch was 71,556mt and available longline log sheets estimated catch was 3,888mt in the FSM Exclusive Economic Zone (EEZ).  A copy of the most recent stock assessment report can be seen here.